Helping Those with Hemophilia in Other Parts of the World

I wrote this article that appeared in the “OneVoice”  August 2008 newsletter for the Save One Life organization. Sweet Affliction would like to share it with you! It is titled:

Why I am so passionate about giving back to hemophilia worldwide……..And why you should be too!

At age 42, with all the problems that come with hemophilia, I still think having hemophilia was the greatest gift I was ever given. It’s taught me that I cannot change the lot I was dealt, but I can choose how I live my life. And when I recently realized how the other half of the world lives with hemophilia – without medication, in poverty – it hit me one day; I want to help people in general to improve their outlook on hemophilia. And I want to encourage everyone to give back to those around the world who are not as fortunate.

It all started about seven years ago while I was on the internet, participating in an online support group. One day a young man emailed the news group to request help finding factor, the medication used to clot blood. His name was Lucian, age 21, from Romania. When I contacted him directly, I learned he had no access to clotting factor. He could not even get Cryoprecipitate – the treatment I used for my first 18 years. I started an email friendship with him and it has spun into one of the deepest friendships I have, without us ever having met face to face. 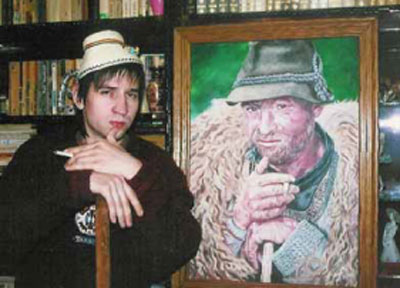 Lucian Uritescu with his painting

While I was able to live an active life in the US, Lucian’s life was a struggle. On prophylaxis, I worked out with weights, and participated in mountain biking. Lucian, without reliable access to treatment, does not participate in any physical activities for fear of bleeding. He had to quit school at age ten due to his frequent bleeding episodes. While resting in bed often, he taught himself to read, write and speak English by watching American television. Can you imagine going for days or weeks with a bad bleed, with its throbbing pain, with joints swelling like a balloon and not being able to treat it?

Then Lucian wrote in 2006 about changes in treatment protocol in Romania. Those with hemophilia would no longer be treated at an ambulatory center. All treatment, even for minor bleeding episodes, would require a two-week stay in the hospital. The challenges Lucian faces daily are mind boggling to me and yet my Romanian friend lives this way every day, just hoping he does not get another bleed. Thousands of others like him living in developing countries face the same daily challenges. I feel guilty knowing how Lucian lives, but I reconcile that by giving, in some way, to someone in a developing country who has a bleeding disorder who needs help. You could, too.

How blessed we are

Reading about Save One Live founder Laurie Kelley’s hemophilia adventures in the poorest villages from Africa to India has helped me see how blessed we are to live in the US. Hemophilia is not that bad when you have access to factor and proper treatment.

But in the developing world, it’s another story. For example, I remember one night when I got a phone call from Lucian. He told me that he had just gotten mugged and had been hit in the head. He asked what he should do. It felt strange for him to be calling me. In the US, we would call our doctor or treatment center, or go to the emergency room. Lucian doesn’t have those kinds of options.  He asked me if he should take some of the donated factor he had on hand. I told him yes. I was not trying to play doctor but I knew his alternatives were not good. I recommended he take a larger dose than normal and to keep a close eye on his condition. I stressed he should go to the hospital if his condition got worse. He called me the next night from a pay phone at the hospital. He said he did indeed have a head bleed. Lucian was lucky; the hospital had some plasma on this occasion and he would recover. It is these kinds of events that really make me see how life is for many people with a bleeding disorder, like Lucian, in developing counties.

It’s strange: Lucian usually ends up motivating me, because despite all he has to deal with, he still has a positive outlook on life. Lucian is an artist. Last Christmas he sent me a unique gift: a painting of an old man. I love helping Lucian, and expect nothing in return, but when I got that painting and saw all the things he sent my son Keeton, and me it was the best Christmas gift I got last year!

Lucian hasn’t had a formal education. He wasn’t able to attend schoold regularly due to his bleeding episodes. He is now unemployed, and lives in a small apartment with his parents and grandmother. There is little privacy. And they own very little. Days and even weeks sometimes pass before I get an email reply back from him. His Internet access for years had been through Internet cafes, which are costly. With little money, it’s a problem for Lucian. Can you just imagine life without easy access to your computer? Most of us are addicted to being online; it’s an easily taken for granted way of life. When it is your only access to the outside world, and it is limited, it must be frustrating.

To help defray costs, we recently  began using Skype, a free telephone service provided over the Internet. We are even able to use a video link. Talk about an unreal experience, to see him and his family in a live video! I even performed a song on my harmonica, and watched their faces in surprise as I played!

To whom much is given

I have tried to live my life according to the Bible quote “To whom much is given, much is required.” I cannot tell you how it feels when I get emails from my friend thanking me for helping him; to receive his Christmas gift was wonderful. My friends who do not have hemophilia would never be able to experience that kind of appreciation.

If you get involved with Save One Life, it too will change your life. I truly believe if my parents had been able to read Save One Life’s One Voice to me when I was a young child, it would have given me a different way to view hemophilia. Rather than feeling sorry for myself and struggling with poor self-esteem, I could have learned how others live around the world. I could better appreciate what I had. Perhaps I would have started back then helping other kids, but it’s never too late to start helping now.

Because of  my efforts, Save One Life will enroll Lucian in their sponsorship program. If you’d like to sponsor a child with hemophilia in the developing world, contact them today! There are children waiting for a sponsor like you. Visit www.saveonelife.net for more information.