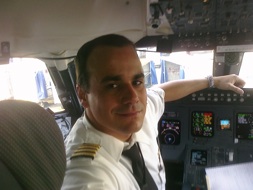 Have you ever had a dream that you just knew you had to fulfill?  Something you just knew your life would not be complete without?  So it was for “Brownie”, a thirty-something airline pilot living (and flying) with hemophilia.

Brownie started flying at the ripe old age of ten.  His first flight lesson recorded in his logbook is dated 1986!   He even remembers how he had to sit on phone books to see out the window, and his flight instructor had to strap blocks onto his feet so he could reach the pedals for his lesson.  He says, “Almost since I could talk, I have talked of becoming an airline pilot.  I waited until I was ten because that was when I could help out enough around the house to earn enough money for a flight lesson!”

His dad was a private pilot and he says his parents were a huge positive influence in his life.  “They taught me from a very young age, that I could do whatever I set my mind to,” he states.  He says he has been told that he used to fall asleep in the back seat of his father’s plane before he was old enough to know what was going on.  He and his dad still share a love of flying today.

When asked if his having hemophilia got in the way of his dream of flying he said, “My hemophilia has been a significant hurdle in becoming a pilot and continues to provide challenges in my career.  I have never been as concerned about my hemophilia as the FAA is!”  Each year he has to pass a flight physical along with all other commercial pilots, the only difference is, he also has to obtain a note from his hematologist stating that he is healthy enough to fly.  He says, “I have had to work harder to get my medical certificates than the average pilot, and this has made me more appreciative of my opportunities.”  Brownie infuses prophylactically to avoid any problems with his flight schedule and he always makes sure that he has factor with him when he flies.  “There is no time for a bleed when you are running on such a strict time schedule,” he says.

As if flying with hemophilia wasn’t enough, Brownie is also an avid hunter and fisherman, even though as he replies, “my wife probably wishes that my dad had never exposed me to the outdoors!”  Depending on the season, he is either hunting or fishing on his days off.  He has been tournament fishing since about 1993 and hunts mule deer, whitetail deer, waterfowl, turkey and pheasant on his families’ ranch in Nebraska.  He also hunts near his home in Kentucky for waterfowl, deer and turkey and in Texas for dove and quail.  He says, “Hunting involves a lot of walking and hiking over some treacherous terrain, while fishing requires standing for up to nine hours straight.   The joint pain gets harder and harder to overcome, and I am sure that at some point I will have to slow down – but for now I figure I better get it done while I still can!”

Many dreams have come true for our friend “Brownie”.  When asked if there was ever a time when he thought his hemophilia might get in the way of achieving his dream he said that he actually quit flying for a while when he went to college.  He assumed that the FAA wouldn’t allow him to get the medical certificate needed to be a pilot.  He nearly gave up his dream and began studying agriculture management at Texas Tech, but when he learned he could get his medical certificate he went to flight school in Oklahoma to finish his flight training.  “Never let anyone tell you what you can’t do,” he says.  “There were times that I thought it wouldn’t be possible, but determination and perseverance pay off.”  Brownie let his dream lead him to the skies and he is flying high with hemophilia!