Get ready for the next play…..Baseball – A good Life Lesson 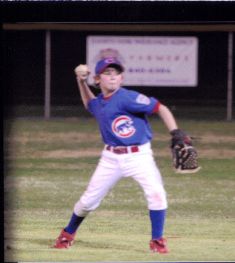 Hemophilia doesn't keep this "Ace" down

Fourteen year old Michael Schnitker is a boy on a mission, a boy with plenty of determination.  He is a boy who loves baseball, and doesn’t let his hemophilia keep him from playing the sport that he loves.   He does remember a time when he really wanted to play football, but soon learned that baseball was a much better sport for him.  He says, “I really got interested when I saw the Little League World Series on TV.”  He started playing T-ball at the ripe old age of 5 and has enjoyed many seasons since then.

Michael plays outfield and second base, and his favorite part of baseball is fielding.  He especially enjoys how good he feels about himself when he makes a good play.  He has attended hemophilia camp a couple of times, but for the last few years has opted to attend baseball camp instead, an option that seems to have paid off for him.  He just finished a successful season with the North Garland Indians and will be trying out for the high school team at Sachse High School in Sachse, Texas in the spring.

Many parents may be concerned about injuries from playing a sport such as baseball if you have hemophilia. However, infusing regularly via prophy allows Michael to live out his sport.  Michael reassures us that he has really had very few injuries.  “Not too many,” he says, “a few bruises, and one time I hurt my eye.” 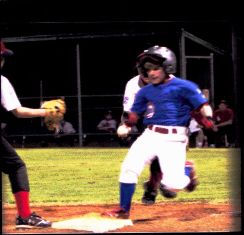 Safe! Michael wears out the base pads for another hit

Michael is referring to an injury he had last year when he was playing second base and the third baseman threw a ball to him; the sun was in his eyes and since he couldn’t see, the ball hit him in the eye.  A trip to the ER and a few extra doses of factor and he was good as new.  Michael now wears sun glasses to protect his eyes, a good idea even if you don’t have hemophilia.

There is always the potential to get hurt, he says, but the benefits of baseball far outweigh the dangers.  I asked Michael what he thought he had gained from baseball and he said, “New friends, and I get to keep busy and out of trouble!”  As I talked to him I could also tell that he had gained confidence in himself, a kind of confidence that you just can’t find.  By Michael’s life experiences playing baseball, his self-confidence had grown.  If your child doesn’t like baseball, help them to find something that they are passionate about.   Their self-esteem will rise and they will feel like they really have a purpose in life, a purpose greater than their hemophilia.

When I asked Michael what advice he would give to parents of kids who have hemophilia he said, “Don’t be too protective.  Let them try things, within limits of course.”  And his advice to kids with hemophilia who want to play baseball, or any other sport for that matter, “keep trying, even if you miss the ball – get ready for the next play!”  Michael Schnitker is learning good lessons in baseball, and good lessons for life!  Get ready for the next play!

2 Responses to “Get ready for the next play…..Baseball – A good Life Lesson”