I have Severe Hemophilia and had a total Knee replacement!

The following article was written by our first guest blogger – David Simmons. It chronicles his decision on getting a knee replacement despite having severe Hemophilia. 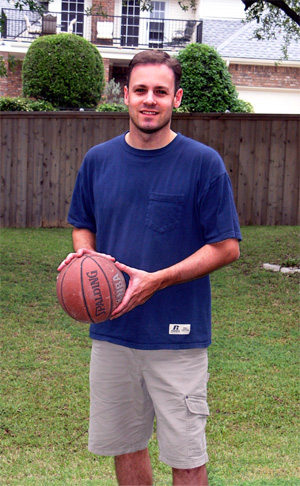 I had always known, following an inability to get rid of a stubborn limp after college and upon receiving several opinions from orthopedic surgeons, that I would someday require total knee replacement surgery.  My left knee had become a “bone on bone” situation after many episodes of repeated bleeding into that joint as a child.  Over time, the amount of cartilage remaining in the joint slowly diminished.  I remember one physician who took a glancing look at my x-ray and simply exclaimed, “ugh”!  Being a 34 year old severe hemophiliac, I naturally had concerns about how such an invasive procedure would affect my life, my ability to work, and to participate in activities that are important for fathers to participate in with their children.  Are the results guaranteed?  Certainly not, as with any surgery, the procedure comes with certain risks.  However, the potential benefits of the surgery, in my opinion, far outweighed any risks involved, even for a hemophiliac.

Approximately one year prior to my knee surgery, which took place in December 2008, I had contemplated the surgery but ultimately did not execute.  One of the main reasons I decided not to go forward with the surgery at that time was my physical condition.  At the time, I weighed nearly 220 pounds and generally felt tired and out of shape.  Over the next year, I committed myself to following a regular exercise regiment which I still follow today.  I never knew how much exercise can make a difference in the way you feel on a day-to-day basis.  Yes, there is one form of exercise you can perform as a severe hemophiliac with a blown knee…swimming.  As I continued swimming, I gradually benefited from more energy each day, a lower weight, and a trimmer waistline.  I felt that it was important to be in good physical condition to have the best chance for the knee replacement surgery to be a success.

Even though I knew I needed the surgery sometime in the next few years, I had no idea that the surgery would be occurring so soon.  An opportunity had emerged at work whereby the senior managing partner at the commercial real estate firm I work for would be gone for an extended period overseas.  Since I report to this partner, it was the perfect opportunity for me to work-from-home, to the extent possible, while recovering from the surgery.  I was told that it is often a six-week period that patients are not able to return to work.  The idea was met positively at work, so I decided to go ahead with the surgery; however, getting on a surgeon’s schedule on short notice at the end of the year is easier said than accomplished.  Many patients choose to have surgery over the Christmas holidays because they have extended vacation time and also want to get the surgery done prior to the end of the year to avoid paying the full amount for deductibles and co-pays in connection with their health insurance policies. I had to beg and plead with the various doctors, nurses, and rehabilitators to get everything lined up within a two-week period of time or else my window of opportunity would soon close.

With regard to the surgery experience, it was about what I expected.  I was nervous prior to the surgery, but everything went very well and the surgeon gave a good report to my wife and mother, both waiting anxiously in the waiting area.  Part of the precautions taken for any surgical procedure taken on a hemophiliac involve having clotting levels at 100% for a sustained period of time.  I was very concerned about the frequency of my infusions of Factor VIII, and was becoming aggravated with the nursing staff who didn’t completely understand how important the timing was for the infusions.  They would often show up 30 minutes to an hour after the scheduled time.  Although I’m sure an hour either way doesn’t make much difference, in my mind, I wanted everything to be right on schedule.  After all, I really needed my knee to work for me.

Did it hurt?  Well, I was fine until the anesthetic injected into the knee during surgery wore off.  It was Christmas day and my wife and children were there with me, in the hospital room, opening presents.  I remember how difficult it was to tolerate the pain in my knee while trying to hide may pain from my children in an effort to keep the focus on them.  After a narcotic mix finally arrived, I had some relief.  The difficult part of the pain experience persisted for about a week after surgery.  It was difficult to be totally comfortable and physical therapists always expected more that you could deliver.  However, the paid did subside a bit, and I did slowly begin to gain more range of motion in my knee.  After a 4 day hospital stay, I went home.

My rehabilitation at home involved an in-home visit from a physical therapist a couple of times per week followed by outpatient physical therapy sessions for about two additional months.  The sessions involved low impact repetitions of muscle strengthening exercises followed by stretching.  The stretching exercises were sometimes painful, because the therapist would often need to “break through” a point in the range of motion where I had difficulty meeting the goals.  For the first few weeks, I used a walker to get around the house.  After a while, I ditched the walker for a cane.  Finally, I ditched the cane.

Now, my knee freely swings through a normal walking stride without pain.  Although my muscles surrounding my knee are still much smaller than the muscles surrounding the other knee, they will eventually gain mass and strength.  Whatever limp I once had is now severely diminished.  The pain I once experienced in my knee on a daily basis and at night when I would sleep is now gone.  I am now able to walk longer distances, stand on my feet longer, climb stairs, play low-impact sports and other activities I could not perform prior to the surgery.  Although the prosthetics will always need to be reevaluated by x-ray and precautions taken to avoid any infection around the knee, I feel that the absence of the daily pain that I once had and my increased physical ability far justify any issues that I may have to deal with concerning the prosthetics.  Overall, I am very happy with the outcome and would make the same decision were I to have the choice again.

26 Responses to “I have Severe Hemophilia and had a total Knee replacement!”