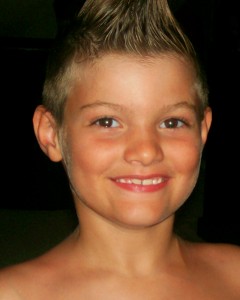 At my speaking engagements, I always mention that if you can deal with hemophilia, then you can deal with anything life throws at you. Kids need to be proud of their hemophilia and learn to tell their friends about it in a positive way. I also believe  that by being brave enough to infuse themselves with a needle – something most kids without hemophilia could never imagine doing, kids with hemophilia will be stronger and their friends will look up to them. This article is written by a mother of a young son about some of her ways to make giving infusions more of a treat and less of a tragedy. I will add that one of the highlights when I was growing up was getting back from the hospital and having my dad take me to  Dairy Queen for a Dairy Queen Dilly bar…That was a great time for me as a youngster!  Andy

Jake, a severe factor 8 Hemophliac, has always been an active bundle of joy to our family. At the age of 2 he experienced his first joint bleed in his ankle. It was a spontaneous bleed that occurred in his sleep. Anytime as a Hemophlia parent you awake to your child not being able to walk is overwhelming. We immediately went to our pediatrician who administered his factor. Our HTC was almost 2 hours away at the time.

Within a month our HTC decided is was best to have a port put in. I was a stay at home mom and my husband worked close to our home. We had a routine for our prophalaxis treatments. My husband would take an early lunch break three times a week and we would take turns doing his medicine. One would access the port while the other parent held down his arms to keep him from wiggling everywhere. We felt almost inhumane about holding our son down. We wanted our son’s Hemphilia to be a positive experience and something he did not grow up to resent.

So after lots of thought I came up with an idea. After every doctor’s visit he got a Dum-dum sucker from the doctor. This was a big treat for him. I do not keep alot of candy in the house. He seemed content after he got his sucker, then the idea hit. When we would begin to access the port we would give him a sucker. It was small enough that he didn’t drool everywhere and after accessing the port he was almost done with his sucker.It finally got to the point that I no longer needed my husband there to help me. I was able to access the port and handle infusions by myself.

After a year of doing this remarkably we started cutting back on the suckers and he stayed still during his infusions. Through communication and a positive attitude we have been able to transition to veins with him sitting still. We still occassionally use suckers during infusions. We have done this for 6 years and still NO cavities. We infuse in the morning so he just brushes his teeth afterwards