Our Co-Founder David gets another ankle fusion

Ankle fusion. Sounds completely medieval. In a sense it is and I have had two of them now. My first was about five years ago, and my second was done recently on my right ankle July 13, 2011.  Why must one have an ankle fusion? Well if you have severe hemophilia A and were born before the age of Prophylaxis the reason is simple. Chronic bleeding episodes over a lifetime, mostly during the first 18 years of life, eventually breakdown all of the cartilage in the ankle joint leaving an extremely painful grinding of bone on bone.  The only way to get rid of the continuous pain is to fuse the joint. 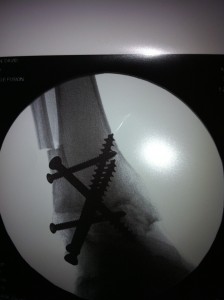 X-Ray of my right ankle fusion. Notice the broken fibula!

My bleeding episodes occurred in my left ankle during my elementary school years. I remember my physical therapist fashioning different plastic molds in an effort to stop the bleeds and alleviate the pain. Crutches were part of my regular fashion statement at school and despite the jeers of some bullies and others accusing me of “faking it” I continued to put on my brave face and soldier on. Back then during the 70’s Hemophilia did not have home treatment protocol. Bleeds often became so severe and painful that they required in-patient stays at the hospital. I became a regular at Primary Children’s Hospital and spent many nights crying myself to sleep, my father rubbing my ankle or back to try and help me relax from the crushing pain.

Eventually my left ankle finally settled down when I was about 12 years old. Then I promptly became an avid sports fan and discovered the joys of pickup basketball and tag football games in my neighborhood.  My right ankle immediately decided it was its turn to bleed. Luckily we did have home infusion treatment in place by then and I was able to stop the bleeds before they were out of control. However, my right ankle along with my left knee continued to be target joints bleeding almost weekly with my left ankle occasionally joining in on the act.

A painful worn out joint is the end result to all of this bleeding and an ankle fusion is the best remedy to fix it. I eventually could not walk at all without severe pain and tendonitis around my left ankle and decided to get my first fusion in 2006 at the age of 41. Ankle fusions are actually a pretty straight forward surgical procedure. Five long screws are drilled deep into the ankle and tibia from two incision points. One is laterally on the side of the joint and the other directly over the top.  They have to physically break your fibula during the surgery to better access the joint area. The joint is set at a right angle 90 degrees and soft splinted for two weeks. That first two weeks is the most painful but can be controlled pretty well with pain meds.  Following that you are put in a hard cast for an additional four-week period. There is no weight bearing at all during this six-week period, which makes it very difficult to function in your daily activities.  Finally you are placed in a walking boot for 4 – 6 weeks and about 8 weeks post-op you are finally allowed to put some weight on the ankle. The boot does a great job of keeping the joint stable and I did not experience hardly any pain at all while walking in my boot.

Both of my ankle fusions went like clockwork. Because I infused to 100% every day for the first few weeks I did not experience any bleeding problems. My ankle healed and the bone fused together around the screws eliminating the pain. There is no physical therapy for this procedure. You pretty much are on your own and the process of walking again generally stretches out the foot and works the post-op pain out over a period of several weeks. Your foot bones and toes take over the bulk of the bending when you walk so they will get sore from time to time and may possibly get worse over the long term, but generally speaking you will feel like you have a new ankle and best of all no more pain! Your ankle actually still bends although somewhat more limited but I now have two pain free ankles and am able to walk with a semi normal gait doing the things I enjoy including golfing and going on long walks with my family.

If you have an ankle joint that has basically been destroyed by a lifetime of bleeding and are experiencing severe pain don’t be afraid to get this procedure done – it is not an easy process but the end result is fantastic and you will be so glad that you did it. If you have any questions at all about this please email me! thefeel@mac.com