Recent Posts
If you know me, you know I talk a lot about how having hemophilia has been a gift because of all the things I feel I get to do and most importantly all the things that I have learned or learned how to handle because of having hemophilia. I have said many times it is a gift. So, when I heard Melanie Gable tell her story at the Texas State Hemophilia Conference in August and realized how much it echoed what I have been saying about hemophilia being a gift, I wanted to share it with everyone in the hemophilia community. Because it doesn’t matter what challenging situation you are going through your perspective is the more important thing to remember and looking for the positive is one of the only good things that can come from your situation.  Here is her story….. 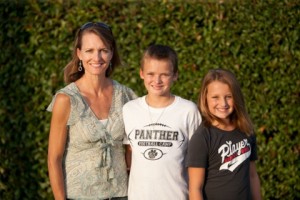 How is it possible that being violently assaulted and potentially kidnapped by a mad man became a remarkable blessing in my life?  How is it possible that having both legs broken, crushed vertebrae in my lower back, a torn liver, a concussion, and a broken right arm (with arthritis to follow me the rest of my life) could help me become a stronger and more faith filled person? And how is it possible that enduring isolation, fear and extreme pain would help my heart become more compassionate to struggles other people experience?  These are the most precious gifts we receive for becoming survivors!

One day I went out for an afternoon jog.  An early-release,  convicted felon,  sitting in his truck, decided I’d be his next victim.  He had tried to get another woman in town earlier that day, but was unsuccessful.  Once I entered the neighborhood  and he noticed me, I became his mark.  He circled the neighborhood once before driving his Ford F150 truck up the curb, onto the grass to smash into my body at full speed.  I rode on the hood of the truck 20 feet before he hit the brakes, sending my body in the air like a rag doll, smashing to the concrete.  He then parked his truck near me and walked up saying, “I’m not leaving you here…you’re my evidence.” Throwing swings with my arms and screaming as loudly as I could brought no one to my aid.  The assailant and I fought in the street for what seemed hours.  As he forced me into the truck, terror overtook my mind, and I screamed, “God, help me now!”  Instantly, the entire neighborhood ran towards the vehicle.  I saw people through the windows coming to help me.  The perpetrator let go, and I safely fell to the ground in the arms of a man I had never met, surrounded by other strangers. 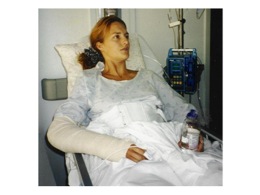 What unfolded over the next year was a series of surgeries, daily physical therapy sessions, relearning life skills (bathing, toilet, etc. with my left arm…the only limb not in a cast), counseling appointments, police interviews, court appearances, and rehab in every direction of my life.  Since I had only been married a year, the profound impact on my husband’s life was immeasurable.  Mike and I were in a crisis that was way over our heads, and we were near financial ruin, as the medical bills continuously streamed in.  The doctors were certain I would limp the rest of my life, and carrying a baby to term was highly unlikely. The sadness, stress, fear and isolation were crippling.  We both knew this was a nightmare we might not survive together.  It seemed to us that there was no hope in our lives.

And yet, small obstacles were slowly overcome each day.  Family, friends and the community surrounded us with amazing support and love.  Every single need we had (whether it be large or small) was delivered, such as groceries, mowed yard, drives to physical therapy, financial support, free physical therapy and surgeries, emotional support, and the list went on and on.  Every prayer request was answered.  And sometimes we didn’t know what to ask for, but the needed assistance was given.  It was overwhelming to see how everyone wanted to help us survive.  And most importantly, Mike and I began to creatively figure out new ways to do things.  For the first time in our lives we had to “dig deep” within ourselves to find patience, peace, forgiveness, ingenuity and strength.  The challenges that were placed before us forced us to become stronger people, respectful partners, and more faithful servants.  And we had to learn to trust others and  especially to trust God.

The love and support we were given changed my heart and helped heal my body, marriage and spirit.  The unselfish generosity of strangers allowed me to heal so completely that now I speak to audiences around the country (sometimes my husband and our son and daughter travel with me!), sharing the differences we can make in the lives of others.  I remind people that adversity presents an opportunity to gain great wisdom and revelation, and that desperate circumstances are a gateway to living in excellence.  Only through adversity will we understand what our realm of influence is, whether it be surviving our own pain or helping others who are suffering.  Pain is the gift that nobody wants.

So how is it possible that one man knocked me down so badly, and I survived, and later thrived?  It is because 1000s picked me up, and God answered my initial plea abundantly.