The Gears for Good bike ride for HFA was held from September 15-17, 2011.  There were about a dozen people riding and boy, was this a tough ride, but a ride of a life time.  We started out in Washington DC and drove about two hours away to the beginning of the ride down the C & O Canal that went along the beautiful Potomac River for 155 miles.   It took a while for us all the get ready but once we took off we moved along quite quickly.

I remember thinking that our tour leader was going to be one slow tour guide and that this ride was going to be easy, but I soon found out otherwise.  We started through this cool tunnel and off we went.   It was rainy that day, and they told us it was a gravel trail- what they didn’t tell us was that it would also be very muddy.  After riding for almost an hour (it felt like we had ridden 10 to 15 miles) I asked how far we had gone and our tour guide Tom said about 5 miles, I about died and then realized that this was not going to be easy!

I loved the chance to, at times, race my hemo/blood brothers and the camaraderie we developed.  I can’t think of a time when I ever went on a ride with another hemophiliac; it was great!  I usually inflict pain on people that do not have hemophilia but these guys were inflicting some pain on me, especially my old friend Barry Hardie.  The best part was giving Barry a hard time for riding such a funny looking bike (compared to his usually cool multi thousand dollar sleek road bike) and  to make things worse, I was riding Paul Brayshaw’s cool 29er and he was leading the pack most of the time with his old bike.  What was even more remarkable was that Barry had a total knee replacement a few years ago and was as strong as anyone which should inspire anyone that they can still enjoy a vigorous workout on a bike after a knee replacement. 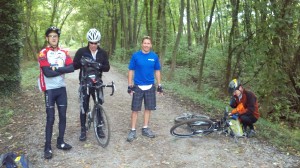 After we had ridden the hardest two hours we have ever ridden, because of the cold, rain and mud, we looked like you had thrown us all into a mud bath.  When we stopped for lunch we were so tired, and the most tired part was, you guessed it, our back sides if you know what I mean!  They kept giving me a hard time because I kept saying this is the best meal I have ever had, but I will tell you this lunch was the best lunch I have ever had.   By the last five miles of the first day, I think we were all talking to ourselves saying “You can do it,” because our bums were killing us.  We got to our hotel and had to literally hose ourselves and our bikes off before going to our rooms!

I think this could be a great nationwide fund raiser that could make a big impact.  Never has there been an athletic event like this in our community.  I want you all to think about participating next year if you are a biker, I guarantee it will be a trip of a life time.

Before I knew about this ride, I didn’t know what to think, and even had to be talked into it by Kimberely Haugsted, but I would definitely pay to do it again next year.  We rode through some of the most beautiful country you have ever seen along the Potomac, and all along the way we stopped to take pictures with our own video crew and photographers.  You would have thought we were all famous by the looks we got from other riders as we were enjoying our photo ops.  I have always been a bicycle nut, and I even worked in the bike business for ten years, starting at the age of 14 all of the way through college, and it was the best thing I could have even done for my joints and building up my legs.  The great thing about biking is that it is so much easier on your joints than most exercises; I have a bad ankle but when I am on a bike, it’s almost like it’s normal. 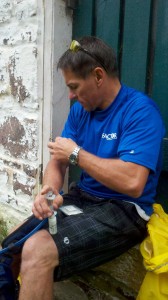 I carried factor with me on the ride, and unfortunately I started having a few bleeds.  After I got my third wind at about 100 miles, my knee started killing me and I even had to infuse on the trail.  Next time, I think I will dose every day instead of every other day.

One of the other things that was incorporated into the ride was the Fit Factor Program, through the Federation.  The goal of Fit Factor is to raise fitness awareness in our community and to try to encourage fitness with kids and adults with bleeding disorders (and others in the community too.)   We all can become more fit, and it sure makes it easier to get through all the things we have to deal with, if our bodies are in as good of shape as they can be.

I have a vision for the future.  If just one person from each Federation chapter rode in Gears for Good and they each raised $2,000, we could raise over $50,000, and have a lot of fun doing it.   All of the money raised goes to Helping Hands; which helps people in the hemophilia community, and wouldn’t that be great?  Think about riding, and I promise that you will be saying this was the best 3 days you have ever had.  Hey, if you want, you might even get to race Barry, Paul, Nick or me.  We all like a good race on a bike-it makes you feel like a kid again!