WRESTLING TO GET A KNEE REPLACEMENT 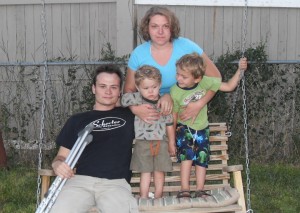 If you ask Charles what his favorite things in life are, he will reply without hesitation that his wife Amber, and two sons Jamey (three) and Max (four) are the lights of his life. Although Charles shares a similar passion for family with many other fathers and husbands, Charles is unique because he suffers from severe hemophilia. Instead of wrestling with his young boys like most fathers, Charles found himself unable to do so due to the severe deterioration of his left knee. After having to consistently miss out on play time with Max and Jamey, it became clear that the only thing Charles could do to improve his situation would be to get a knee replacement.

Born in 1984 amidst the height of the HIV hysteria and inflicted with target joint bleeding in his knee, Charles’ parents decided to only infuse him with Factor 8 when absolutely necessary in an effort to protect him from HIV and tainted blood products. However, as a result of his parents’ cautiousness, Charles’ knee grew progressively worse and he experienced some of the most painful bleeds imaginable. To try to inhibit the bleeding, Charles visited a doctor who gave him some ill advice consisting of immobilizing his knee by casting it for 18 months. The results were tragic; Charles lost the majority of his range of motion, his muscles severely atrophied, and the growth in his leg was stunted leaving him with a severe limp and a shortened leg. Despite the struggles with his knee, Charles was able to escape the ‘80’s HIV free, and in 1992 underwent a left knee synovectomy which helped reduce the number of bleeds and pain but regretfully ensued in a larger loss of motion. Over the next 18 years, Charles soldiered on by keeping the rest of his body strong through lifting weights and working out at the gym.

It wasn’t until the Spring of this year that Charles decided he had had enough and that it was finally time for him to get his knee replaced. He started the search for other hemophiliacs who have had knee replacements and through his research was able to find a doctor who would treat the knee surgery and rehabilitation as equally aggressive as a normal patient; reminding him that he would be fully dosed up on factor 8 and therefore would have no reason to hold back. On June 29th 2011 Charles successfully had his left knee replaced and after staying in the hospital for only two nights he was able to walk out of the hospital on crutches with a brand new knee. The cast was removed on the third day of post op and Charles was able to immediately put weight on it. Range of motion therapy for Charles was aggressive with him opting to skip the passive motion machine after the first few hours and move on to an exercise bike to break up the scar tissue (a process that has been compared to the pain of child birth).

Due to the aggressiveness of both his therapist and Charles himself, Charles has achieved incredible results in regards to his range of motion. Today Charles’s knee can be completely straightened out to zero degrees and bent to the capacity of 123 degrees, whereas beforehand his range of motion was ten degrees straight and 90 degrees bent. His range of motion was not the only good result of surgery, the surgeons were also able to actually lengthen Charles’s leg and remove the bow he developed as a child by inserting a replacement that would normally be used for a twelve year old.

If you ask Charles about his progress he would tell you it’s based on three things: determination, hard work, and lots of Factor 8. Charles infused to 100% for an entire month after surgery and even now he infuses prophylactically to about 50% as he continues working out and building joint and leg strength. Charles now walks with a cane and is learning to walk with a normal heal/toe gait. He spends a lot of time on his “simple” bike at home accompanied by stretching exercises. He is mostly pain free except for the days when he pushes himself too hard.