Below is our first blog post from a mother – we hope you enjoy this entry about Kyle – future second baseman of the Texas Rangers! 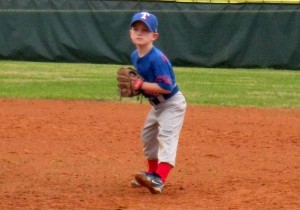 Baseball…As American as apple pie, right?  But, until recently, most hemophiliacs were discouraged from playing the sport, told the risk outweighed any possible benefits.  Well, tell that to my seven year old son, Kyle, who despite having severe hemophilia, lives for the game of baseball.  He not only watches baseball for fun, but he analyzes every pitch, throw, and base running effort by every player.  At the age of 4, he started playing on the t-ball team, and this year, has made it up to coach-pitch.  He loves to hit, but also loves to play second base.  We have had some parents ask us about our decision to let him play baseball;  it was actually an easy decision.  Allowing him to play a team sport was important to us, and we knew football was out of the question!  As he has gotten older, he has asked us why everyone doesn’t go to school with bandaids on their hands or arms, but being a part of a baseball team allows him to be like all the other kids.  He hits, catches, and runs the bases just like everybody else.  Looking out onto the baseball diamond, you wouldn’t be able to tell which one is the hemophiliac.  Baseball has allowed him to develop his strength and coordination, but more importantly, given him the confidence to try new things, and that hemophilia is only part of his life – we are not going to let it rule his life.  He knows that in order to play baseball, we have to stay on his regular prophylaxis schedule, to prevent any possible bleeds.  He won’t be able to play pitcher, and catching would be too hard on his knees.  We are so thankful that his coaches have been so understanding of that.  They are so supportive of him. He doesn’t get any preferential treatment, or pointed out that he can’t do something.  He is just one of the boys on the team!

When we see his face after getting an out at second base, or getting a big hit and scoring a run, we know we have made the right decision. 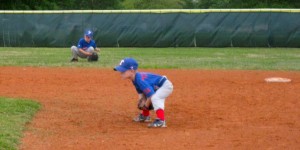 Kyle playing some serious second base!