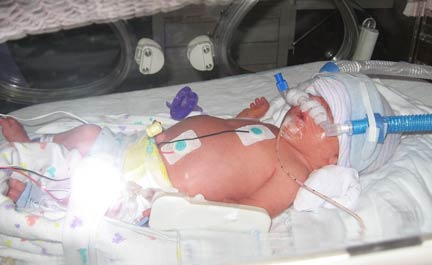 Our Sweetaffliction.com co-founder Andy Matthews and his wife Patti had a big surprise on Tuesday August 4, 2008. To everyone’s surprise their new baby Kelsey decided to make her appearance at 12:20 pm. She weighed 3 pounds 12 ounces and is 15 inches long!

Patti went in for a normal sonogram that morning and the doctor did not like something about it. After some monitoring it was determined that something was abnormal with the uterus causing Kelsey’s heart rate to drop occasionally. They decided to do an emergency C Section at 32 weeks and literally, just a couple of hours later, Andy and Patti had a brand new baby girl!

Patti is resting and hanging in there despite everything. Kelsey is having some complications as many premature babies tend to have but is a strong, spunky fighter and we all know that God will be watching over her. Please pray for Kelsey and  The Matthews family as they struggle to navigate through this stressful time while both Kelsey and Patti recover.

27 Responses to “PRAYERS FOR BABY KELSEY”